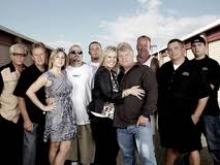 I'm curious what you all think about the new A&E Show - "Storage Wars".  I have to say that at first I was kind of turned off from the show, but watching a few more episodes I now have to say that I'm enjoying it.  In particular I like some of the characters in the show, most notably Barry Weiss, who's known as "The Collector" and who, compared to most of the cast members, actually has some knowledge about what he's after as well as having a keen eye for spotting that elusive "collectible" or piece of "memorabilia."  The only thing frustrating is how he sometimes just tosses aside and often destroys items that he's not interested in that some of his fellow bidders would put to good use.  Also Barry's clothes, from his skeleton gloves to his "lucky socks," adds an element of fun to the show.  He has a colorful personality for an older chap - riding in on his sports motorcycle, or arriving to the show looking like Thuston Howell III in his classic Jaguar.

I absolutely loathe one of the cast members - Dave Hester and his pig call bidding and nasty mouth.  He thinks of himself as "Mr. Know It All" and the supreme expert at the art of bidding, but in reality he doesn't seem to know too much about collecting.  Dave tends to bid most often just to be able to keep one of his competitors from winning and not because he's truly interested in the contents of the locker.  Jarrod and Brandi Schulz, the new kids on the block, who run a thrift store, spend much of their time looking for items to sell.  They too are entertaining in that they compete for who made the best purchase and they try to control each other on when to stop bidding the other's bidding.  The cast is rounded out with Darrell Sheets, the self described "Gambler," who has been buying lockers for more than thirty two years.

As far as actually making money in bidding on abandoned storage facilities, the show's premise, I doubt that you'll come away as successful as some of these guys (and girls) do.  I've heard that the show's popularity has turned bidding on storage lockers into a circus and that you now have too many people showing up who don't know what they're doing and end up driving the price up for everyone.

The show reminds me of going to Vegas and gambling.  In 99% of the cases it seems to be a complete gamble as to what you'll get in the storage container.  Sometimes you can eye a few notable items that you may have a good idea of value, but that's most often not the case.  That small percentage of the time you can end up with the treasure chest of collectibles, but you will more often end up with a sack of someone's old laundry or just pure junk.  At any rate, the show is entertaining, a bit because of the item's found, but more so for the characters on the show and seeing how they all interact with each other and try and outdo each other - in bids, flash, and good 'ol street smarts.

You can learn more about A&E's Storage Wars here

Some of the items found are obvious plants. The one that sticks out the most is when Darrel and Son bought a locker with a painting in it with money hidden in the back.  Upon opening the unit, the painting was in plain view. He picked it up and saw the back was loose, so he opened it. They "found" about  $1300 "fanned out" and taped to the back of the painting. This is so the camera could see all the money.  If anyone was hiding money in a painting, they would put it in an envelope first and tape the envelope to the painting.

I have bought one unit that I did well on. I found 4 gold rings that got me $300 in scrap prices. That is about half of what I paid for the unit. I also have some nice quality furniture. I got 3 Cable boxes, cable modem, 60 new cable remotes, and two satelite decoders. I found some sports memorabilia Most were cards that were made in the late 80s and 90s. practically worthless.

I did find a 5 x 7 picture of Babe Ruth with Dizzy Dean and Daffy Dean (Pitchers St. Louis Cardinals) taken in May of 1935 when Babe Ruth played for the Boston Braves. There was also a Baseball signed by 27 team members of the 1954 NY Giants. The last two of those baseballs went for $2100 & $2600 at auction.

I have had the baseball PSA/DNA authenticated. I will mount a '54 NY giants plaque and the baseball in a shadow box before I put them into a sports memorabilia auction down in New York. That should get me the best price for it.

What dates are the Barbies and what condition are they in? Do you have any pictures?

So9meone should punch Dave in the mouth.  He's a bit too cocky for me

Most of these shows follow a basic script, as the reality is many auctions are boring.  You spend hours sometimes waiting to bid on the unit or item you want and there is not much drama involved as most dealers know and sell to one another, so don't go out of their way to cause problems.

I feel the whole thing is set up. The way they “magically” find a gem every time