Movie Props are Expensive, But They Don't Have To Be. 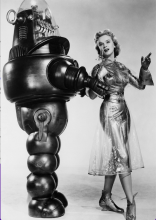 Movies are a huge part of our culture, and classic films such as Star Wars or Harry Potter have some of the most interesting and cool props that have ever been made for cinema. From Luke’s lightsabers from the original trilogy to the different unique wands and robes that are adorned by the characters of Harry Potter, everyone can find a prop they love in their favorite movie. The way props like the original lightsaber hilts in Star Wars were made also adds so much to the story behind these objects and makes them such important items to collectors. Even a flash handle from an old graflex camera flash that was used to create the original lightsaber hilts go for hundreds of dollars on ebay because people want to make replicas of Luke’s lightsabers. Collecting movie memorabilia is an awesome world, but it can be quite expensive.

Although these prices may shy one away from collecting movie memorabilia, finding props from new movies or less popular movies can be a perfect gateway into the hobby. Trying to find props from new movies the moment they wrap up production can provide a safe bet to getting your hands on cool props from the movie. If your interests lie in more popular movies however, going the way of replicas can be the more favorable path to collecting your favorite pieces from a movie. They won’t be the real thing that was used in the movie, unfortunately, but you can still show your love for a movie and feel special having something that is indistinguishable from the real thing that was used in the movie. Although many of these replica props are not licensed by the companies that own rights to sell them, they can often be of higher quality than the replicas that prop houses make for fans.

Finding your favorite props for movies can be hard and very expensive, but it doesn’t have to be unless you want to collect genuine props from popular movies. Smaller movies, new movies, and replicas are always there for the prospective hobbyist to start out with something cool to mark the start of their collection. No matter what you are interested in, you can find something to collect when it comes to movies, from background props, to costumes, to weapons and miscellaneous other props, the world of movie prop collecting is vast.