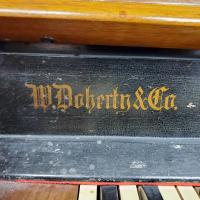 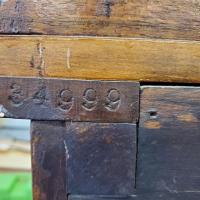 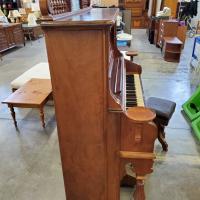 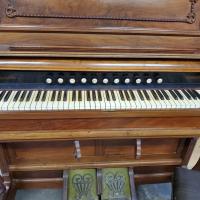 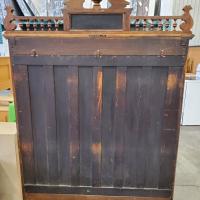 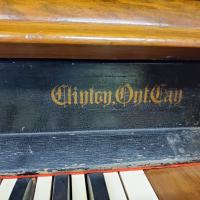 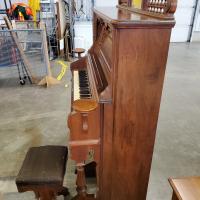 Antique wooden pump organ made by W. Doherty & Co. in Clinton, ON in 1900 as based on the serial number, 34999. The organ is still fully functional and in good shape. It also comes with the stool that came with it.

Appraiser's Description:
One Early 20th Century Reed Organ by W. Doherty & Co.
Appraiser's Remarks:
The Reed or Pump Organ as they are better known, was once an important domestic instrument, offering a cheap alternative to the ever-popular family piano while, at the same time, providing a suitable instrument for accompanying family hymns on a Sunday. It was the product of a world-wide industry that turned out hundreds of thousands of organs a year at its peak. Demand for reed or pump organs dropped off after the First World War, and most ended up stored in back rooms and barns. Demand for them for is still very modest, and many were often converted into desks or bars by antique dealers looking to make them a more marketable item. In the current market, values for them in “as is” condition at auction is still very modest and depends on who wants one and how bad. Of the many pump organs I’ve seen come up for auction over the last couple of years very few have sold for more than $200.00
Estimated Value:
$100.00- $250.00