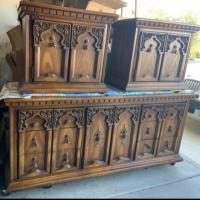 I am interested in finding out more about this collection. It looks stunning and someone is selling it locally and what I am sure is a STEAL.

I did about 2 hours of research just to find out that it belonged to the Tangier collection. However I can't find out much else on it at all.

Appraiser's Description:
Broyhill Premier Tangier Dresser and 2 nightstands with 2 mirrors
Appraiser's Remarks:
Broyhill began production of the Premier line in 1957 at their Lenoir Chair Company plant, with a specialized sales force of 30 and an extensive national advertising campaign. The Premier included a number of different styles, including the Tangier's line made through the 1970's. The premier line was popular, but the company did not turn a profit until the mid 1960's. Unlike Mid Century Modern furniture in the Danish style, demand for furniture in the Moorish Tangiers style is not currently in demand and values for it remains modest at this time. Comparable pieces now often sell at auction for under $600.00.
Estimated Value:
$400.00- $600.00