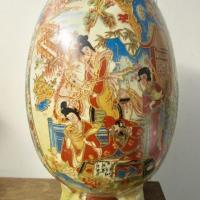 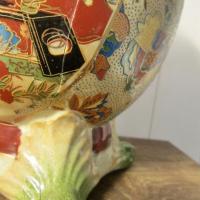 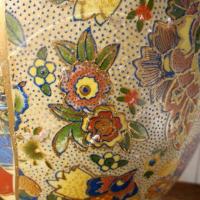 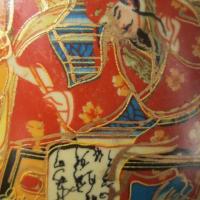 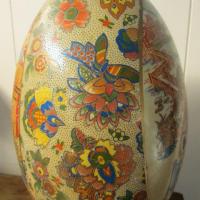 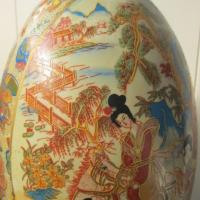 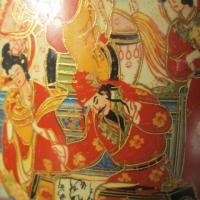 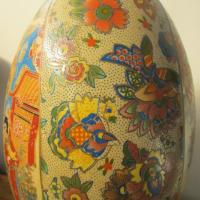 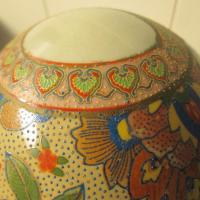 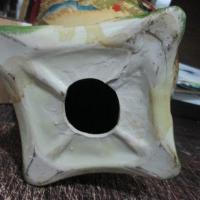 Bought in a local antique shop, cracked, for $75. Have seen many other vintage/antique Asian pottery eggs but none with the stand being part of the fired pottery, and of lesser sizes, so thought this one rather unusual.

The crack is rather significant, starting in base at the right and cutting across the bottom of a bijin's komono and into the floral cloisonne-like panel (I am unsure if this is even Chinese or Japanese. Is what the scribe is writing perhaps a clue/a mark even?) Photos 2 and 3 show the crack.Size: 1 foot (30cm)

I'd be very interested to hear what the value of it is, albeit cracked, considering such a heavy and fragile thing has traveled so far (to New Zealand) and existed so long. Many thanks in anticipation.

Appraiser's Description:
One 20th Century Chinese Satsuma Style Egg
Appraiser's Remarks:
Based on the images your egg is Chinese, but in the Japanese Satsuma style. Most like this one are relatively modern, post dating World War Two (1945) and remain in production to this day Eggs like this have been produced in huge numbers, so values tend to be quite modest. Even for those in undamaged condition often sell for under $75.00.
Estimated Value:
$50.00- $80.00