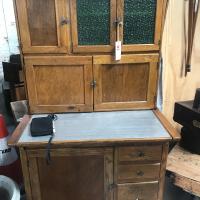 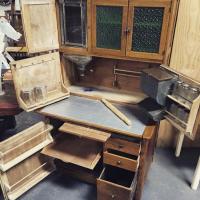 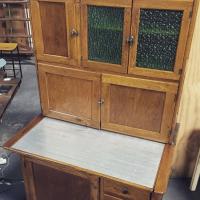 The flour bin metal border is stamped "Pat. Feb 8 ,1910". Unfortunately no paper labelling on the back of the unit, I'm not sure if it's been replaced in its lifetime.

Appraiser's Description:
One Early 20th Century Hossier Cabinet.
Appraiser's Remarks:
These free-standing kitchen cabinets are collectively referred to as "Hoosiers" , after the Hoosier Manufacturing Co. of New Castle, Ind., which was the first to produce these cabinets beginning in 1903. Few kitchens the early years of the 20th Century until the 1940's were without one of these labor saving devices, so they still survive in large numbers. Generally these were made in two types, those with clear finishes over oak or elm and those with painted finishes over hardwoods such as maple, elm or basswood. In today's market it is the oak examples in a clear finish that are the most sought after, the painted examples are the least desirable because of the difficultly in removing all the primer and paint from the wood grain before refinishing. Currently at auction comparables sell for about $375.00.
Estimated Value:
$600.00- $800.00