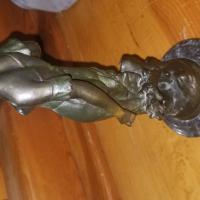 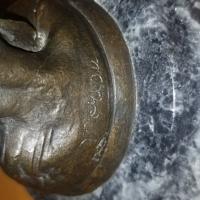 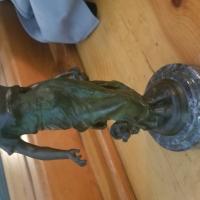 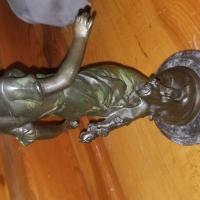 Statue with shady spears to be a marble base. It belonged to my grandma, don't know much about it

Appraiser's Description:
One 20th Century Spelter Figure After Moreau
Appraiser's Remarks:
Based on the images this is a 20th Century Spelter figure after originals by Moreau. Spelter is a zinc alloy that resembles pewter in its natural state, but is often plated to make it resemble bronze. To determine if it's bronze or spelter can be determined by scratching the base, when scratched spelter will show as a silvery grey color underneath. 19th Century originals generally are marked with foundry markings of the company licensed to produce them. Values for these early to mid 20th century spelter examples tends to be modest at under $300.00.
Estimated Value:
$150.00- $250.00