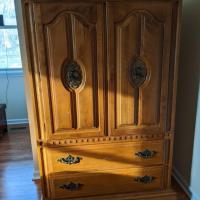 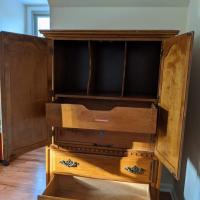 Appraiser's Description:
One Colonial Revival Style Armorie
Appraiser's Remarks:
Your piece is in the Colonial Revival Style which has gone in and out of popularity a number of times since the late 1870's, Armoires like this one made from the first quarter of the 20th century through the 1980's. The type of hinges used on yours tend to date it to the early 1970's at the earliest. Armories like this one were generic, mass produced by most of the major American manufacturers in the business, without a named label, determining a maker is impossible. Values for pieces like this last peaked in the late 1980's and has declined severely since then, even in good condition most now sell in the $450.00- $650.00 range , but go for far less at auction.
Estimated Value:
$450.00-$650.00