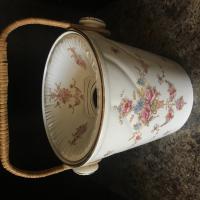 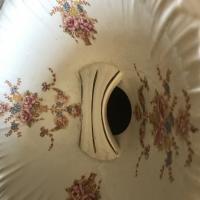 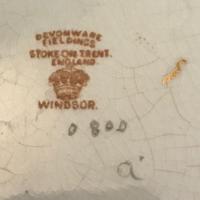 I do not know the correct name for this item.  Is it a commode? chamber pot? slop pail?  I see similar images online but have never been able to find a match.  It would hold about 2 gallons I think to give you an idea of the size.  The lid is inverse to a normal lid and the handle is a bamboo type material.  Seems to be in excellent condition - no obvious damage or chips.  Bottom logo says Devonware Fieldings on it (picture provided).  Can you help me identify this along with a story and potential value?

Category:
Ceramics and Porcelains
Condition:
Excellent
Medium:
Ceramic?
Distinguishing marks:
Devonware Fieldings Crown Stoke On Trent Windsor 08DD? handwritten near logo. Flake of gold near logo.
Size and dimensions of this item:
Approx. 12 inches high, 9-10 inches diameter.
History:
This was owned by a family in rural Saskatchewan, Canada and has been in the family for many years (possibly 60 or more).
For Sale?:
No

I reached out to a museam in the City of Stoke-on-Trent in the UK and received this response:

Your piece is part of a set of bedroom china that would have comprised a large jug and washbasin, one or more chamber pots, a sponge bowl, a soap dish, a toothbrush holder and a covered bucket for the waste water from the basin, usually referred to, rather inelegantly, as a slop bucket. Your piece is a covered slop bucket. The cane covered handle would have been supplied by a specialist maker to the pottery firm and attached before the set left the factory.

Such sets of bedroom china were an essential part of every household, rich or poor, before the advent of bathrooms as a standard part of every housebuild. They were available from the very cheapest, at a few shillings, to the most expensive sets priced at several pounds.

The firm of S Fielding & Co, Stoke-on-Trent, who were the makers of Crown Devon pottery had a large export trade to North America (including both Canada and the USA) as well as to much of the rest of the empire. Approximately 30% of their output was in the form of bedroom china.

The mark on your piece dates it to c.1917-1930, while the pattern number (0800) indicates that this particular design was first introduced in c.1913. I would suggest therefore that your piece dates to c. 1917-c.early 1920s after which period this rather dainty style of printed and painted decoration declined in popularity.

Once bathrooms became standard in every new-built home  (and retro-fitted in older houses), bedroom china sets became obsolete and of the tens of thousands made every year, very few complete sets survive. Often only single objects have been retained as is the case with your piece.

Armed with this new information, is anyone able to provide an opinion as to the value now?