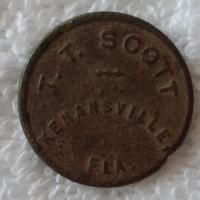 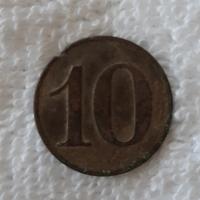 Category:
Coins and Currency
Date Period:
c 1926-1927
History:
The coin originated from a small town in Florida (Kenansville) that had it's own currency. Also known as Sumica, the town ran a self-sufficient lumber community of 600 or so located 16 miles east of Lake Wales, Florida. The elder Scott, was Thurber Talmadge Scott a prominent man in the lumber business across Florida and Osceola County. He was also a president of the Pan American bank in Miami for many years. His son, Dr. Roger D. Scott, is the only known former Sumica settler still alive. Sumica was a company town, with its own currency bearing T.T. Scott’s name and a commissary that sold food and supplies. Historical researcher Tom Sailer of Bartow reports the sawmill was destroyed by fire in 1921, and Scott said his father - who had run timber firms in his native Georgia and northern Florida - bought 43,000 acres from the French owners in 1923 and built a new sawmill at the site. Records indicate the community included a school, a church and a post office. There are very few known relics left from this historical town, once in Florida. Credits and other historical information located here: https://www.theledger.com/article/LK/20070114/news/608126481/LL http://westorlandonews.com/lakeland-cop-donates-historical-coin-to-museum/
For Sale?:
No
You cannot vote here
1
You cannot vote here
0

Someone was searching for a token like yours on this page http://auction.tokencatalog.com/wanted_details.php?name=TT-Scott-Lumber-... not sure if it will be of any help to you.