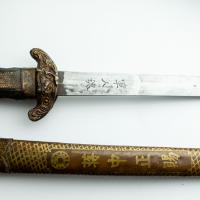 Chiang Chung-cheng served as Chairman of the National Military Council of the Nationalist Government of the Republic of China from 1928 to 1948. He was sometimes referred to simply as “the Generalissimo”. When Sun Yat-sen died in 1925, Chiang took control of the Kuomintang (KMT). To end the Warlord era and unify China, Chiang led nationalist troops in the Northern Expedition. He became the overall leader of the ROC in 1928. Chiang led China in the Second Sino-Japanese War, during which the Nationalist Government’s power severely weakened, but his prominence grew. During the civil war after the Japanese surrender in 1945, he attempted to eradicate the Chinese Communists but ultimately failed, forcing his KMT government to retreat to Taiwan, where he continued the struggle against the communist regime. Serving as the President of the Republic of China and Director-General of the KMT, Chiang died in 1975.

Inscriptions on the sheath, blade, and handle read as follows:
Translated by a former associates Grandmother who immigrated from China in the early 20’s.

Sheath = Given by Chiang Chung-cheng

Blade = You will become the best

It is of crude construction and has a brass covered wooden sheath and handle.
Blade and sheath also contain the symbol of the Republic of China.
Now exiled to Taiwan.
Manufacturing was a cottage industry in the times and these were made by poor peoples attempting to make a very crude living. The markings are hand etched on the blade.
There are examples of these type bayonets in China and Taiwan Museums today.
Very few survived due to the mostly at hand materials used were of poor quality.