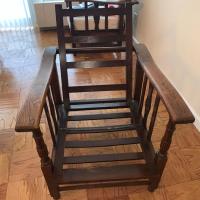 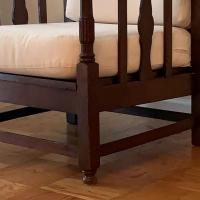 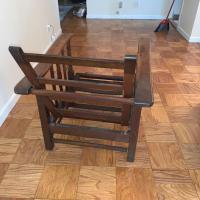 I have inherited these two chairs and loveseat from a great uncle from my family in Wales. I don't know much about them pieces except that the love seat has carpenter marks which I believe read "E 5 5". I believe they were made in the early part of the 20th century, perhaps 1920s based on timelines of when my family was living in Wales, but it is just a guess. I thought they had a Morris chair look to them from the Arts and Crafts period.

Any help identifying when they could have been made, what style, and if they have any value would be really helpful.

Appraiser's Description:
early 20th Century Morris Style Love Seat and Armchairs
Appraiser's Remarks:
Chairs like this typically date from the first quarter of the 20th Century, the majority before World War One (1914-18). They are patterned after Arts & Crafts and Mission style examples, which were made on both sides of the Atlantic ocean during that period. We have no listings for the marking to tie the chairs to a maker, but chairs like this were very popular and produced both small shops and large manufacturers. The style last reached its peak of popularity during the late 1980's, demand and values have declined a great deal since then. Currently comparable chairs by unknown makers tend to sell at auction for under $150.00 each
Estimated Value:
$150.00- $250.00 each.