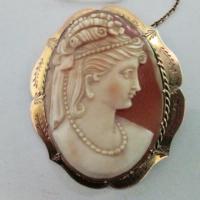 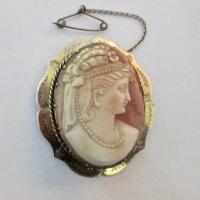 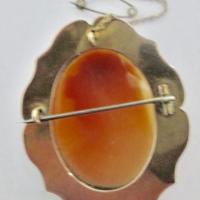 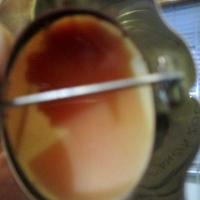 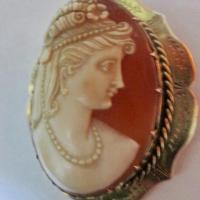 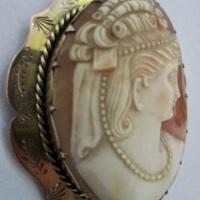 I bought this in an op shop and was told by the assistant that an antiques person, who does their valuations on the more expensive and older items, had said the surrounding is 9ct gold, although there is no hallmark.

Am wondering if the straight nose, c-shaped clasp and strange safety pin can narrow down its age for me. And if indeed the surrounding could be 9ct gold. It looks like it to me, rather than rolled yellow gold.

Apart from the cameo being a particularly fine one, it is translucent when held up to light, so this suggests shell, doesn't it?

I am keen to know anything about the jewellery techniques with which it has been constructed/mounted, and its worth. Many thanks.

Appraiser's Description:
One Cameo Brooch Depicting a Classical Greek Lady
Appraiser's Remarks:
Cameo is a material that is carved with a raised relief that often depicts a profile of a face or a mythical scene. Cameos are commonly made out of shell, coral, stone, lava, or glass. Generally genuine cameos carved from shell will be translucent and when viewed under a strong magnifying glass with show evidence of hand carving, fine cracks and other defects one would find in shell, the plastic examples, often molded will have softer contours and without defects.. The older Victorian cameo carvings are set in either gold or silver, as a general rule any cameo set in gold or silver is unlikely to be a reproduction and will have some marking to indicate the precious metal content, those without markings are suspect and would have to be tested. Plastic cameos can be tested with a red hot pin pushed into the back, if it's plastic or some sort of other resin it will melt and produce an unpleasant chemical smell. Yours of course would have to be tested to determine it's gold content and the material used for the cameo. If it is as it looks, a late Victorian Cameo, it would retail for about what you paid for it, if it tests negative for gold content or the cameo is some sort of resin, it would sell for about $45 USD as costume jewellery.
Estimated Value:
$45.00- $150.00 USD