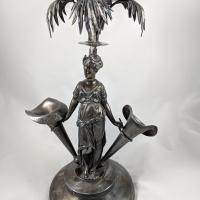 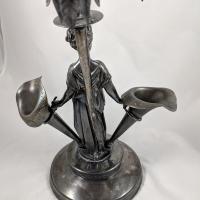 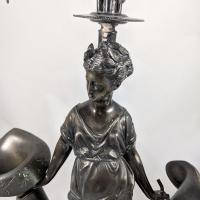 Hello- I have this Meriden sculpture lady (it says Meriden on the underside of her base) and I can't find anything by Meriden online that is vaguely like her. She's about 1.5 feet tall. Does anyone have any idea what she might be worth? Thanks!

Appraiser's Description:
One Late 19th Century Meriden Epergne
Appraiser's Remarks:
This is what's called a "Epergne", an ornamental centerpiece for a dining table, typically used for holding fruit or flowers. They were very popular in the late Victorian period (1875-1900) and had a second revival during the late 1980's , along with the demand for other Victorian decorating items. Since then values have been in decline though.
Estimated Value:
$150.00- $250.00