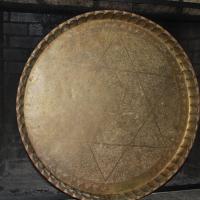 Beautiful large hand engraved copper plate (37,5" in diameter) with a Star of David. Very good condition with a very clear floral design. Has been in our basement for years. no chips, scratches. Would like to get an idea of it's value.

Category:
General Antiques and Collectibles
Condition:
Excellent
Medium:
Copper
Date Period:
not known
Size and dimensions of this item:
37,5 " in diameter
Weight:
few pounds
History:
It was given to a family member about 12 years ago by somebody who had it for over 30 years in their basement
For Sale?:
Yes
eBay Auction Link:
View eBay Listing
You cannot vote here
0
You cannot vote here
0

Appraiser's Description:
One Late 19th Century Copper Table Tray
Appraiser's Remarks:
Large copper trays like this were made all over the Middle East and India during the late 19th Century through the 30's, mainly for the tourist market. Most were part of a short wooden folding table of just above coffee table height, the tray sitting on top. Values for them tend to be modest, the trays on their own often selling at auction in the $50.00- $100.00 range.
Estimated Value:
$250.00