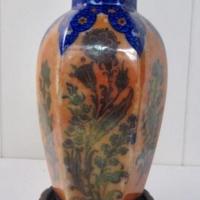 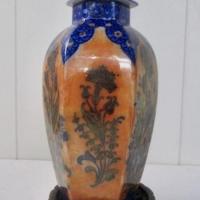 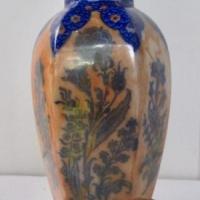 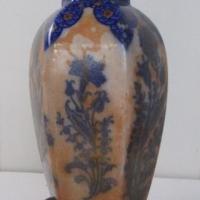 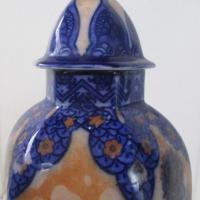 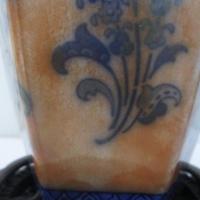 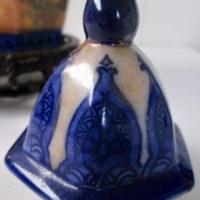 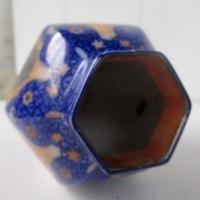 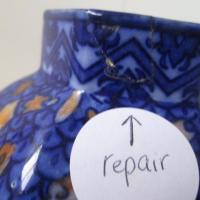 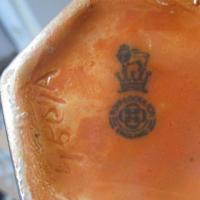 Have ascertained this hexagonal jar is Royal Doulton circa 1902-1922 on account of the crown being present under the lion mark, and probably Art Nouveau given the plant emphasis. (It has a repair made on the blue rim - separate photo shown.)

But I have further questions.:

Does the fact I cannot find its picture anywhere online suggest it's rare?

Does the cross on base signify any particular artist or does it mean something else?

Does the hexagonal shape have a special name in Royal Doulton ware, as in Burslem?

Is this a ginger jar or would it just be described as a lidded jar, being English?

Two of the sides are quite faded and colour may even have changed over time. Do you think it was originally orange or red?

The lid reminds me of a mosque. Is another influence acknowledged in its design?

Thank you very much for your time.

Category:
Ceramics and Porcelains
Condition:
Good
Medium:
porcelain
Distinguishing marks:
Royal Doulton stamp with crown and lion and circle with ROYAL DOULTON ENGLAND Has a wee cross (like a kiss) penned in black ink on base, near stamp Has number imprinted: 4507/A or 7507/A
Date Period:
1902-1922
Size and dimensions of this item:
9¾" tall by 3¾" wide (25cm by 10cm)
Weight:
475g
History:
Unknown. Bought in an op shop.
For Sale?:
No
You cannot vote here
0
You cannot vote here
0