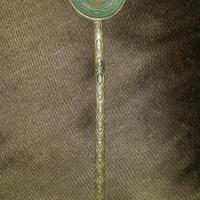 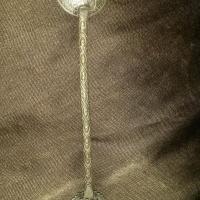 An Islamic symbol , the crescent as a religious symbol has joined the ranks of the Christian cross and the Jewish star of David.

Before Islam, the crescent was the symbol ofSassanids and after capturing Persian lands, the crescent has been adopted by Muslim Arabsand later by Islamic faith.

Note that in the case of an astronomical crescent, such as the moon observed in the sky, the outer arc will be 180°   while the Islamic crescent symbol (hilal) is generally shown with an outer arc significantly greater than 180°  .

The crescent was not a symbol used for Islam byMuhammad, as Islam is against appointing "Holy Symbols" (so that during the early centuries of Islam, Muslim authorities simply didn't want any geometric symbols to be used to symbolize Islam, in the way that the cross symbolizes Christianity, the menorah was a commonly-occurring symbol of Judaism, etc.). This is why early Islamic coins were covered with Arabic writing, but contained no visual symbols.

The crescent is Islam’s accidental symbol most commonly associated with pharmacy. Morocco alternates between green crosses and green crescents.  Depends on Silver (800) not .925 and condition, could be $9.99 to $70.00. Good Luck