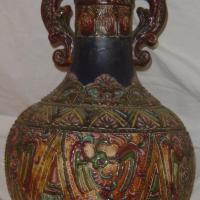 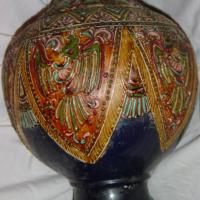 I have  a set vases that I haven't been able to get an appraisal for and was hoping you might be able to help me out.  They have been handed down in my family along with a very unusual pewter pitcher.  I have no idea how many generations the vases have been in the family but I believe the pitcher was only 3 or possibly 4 times and the pitcher is dated 1858.  So I'm assuming the vases are older.

They are a little over 19" tall. I think it looks like a Phoenix on the front of the vases but not sure.  The paint is raised.

Thanks in advance for any help.

Category:
General Antiques and Collectibles
Condition:
Good
Medium:
Possibly porcelain or ceramic.
Date Period:
1800's possibly older
Size and dimensions of this item:
19 1/4 high
Weight:
6.16 lbs
History:
This set of vases has been handed down in my family. Another family piece that has been handed down is dated 1858 but I believe these are older.
For Sale?:
No

Appraiser's Description:
Japanese Satsuma Moraiage Vase
Appraiser's Remarks:
Your vase is 19th century Japanese moriage, a type of earthenware pottery produced at Satsuma Japan in great numbers for the export market. Many pieces like this made before 1891 have no markings at all. While not mass produced in the modern sense of the term it was made in great numbers, so it is not considered rare or valuable. At auction comparable examples often sell for under $100.00 these days.
Estimated Value:
$150.00