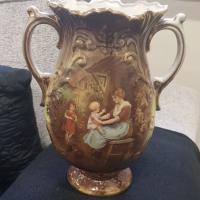 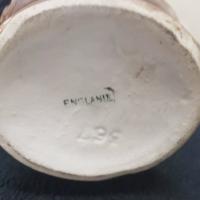 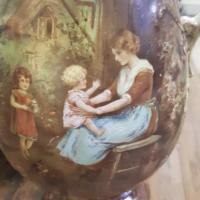 This is vase with a lovely print on the front. I’m not too sure of the year or country of origin. Under the vase it reads England with numbers 367. It measures 25cm x 20cm x 9cm.

Appraiser's Description:
One Early 20th Century English Transferware Vase
Appraiser's Remarks:
Your vase is English and dates between World Wars One and two (1918-39), it's of a type mass produced for the export market during that period, the images on it are not hand painted, they are transfer prints. Most pieces like this were produced in Staffordshire , England, then the largest producing region of Pottery in the world. Pieces like this that carry no company markings tend to be of very modest values currently selling for under $50.00.
Estimated Value:
$25.00- $45.00