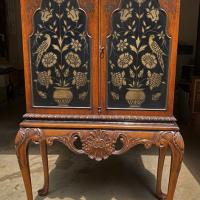 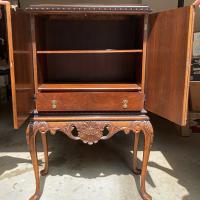 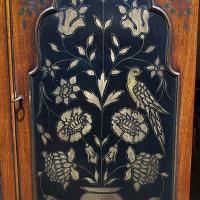 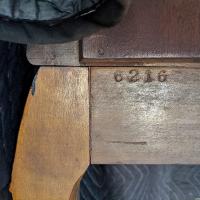 Double-door wooden cabinet/chest on Queen Anne leg base. Doors have an inlay of birds and flowers with hand-painted flowers around inlay. Inside there are two shelves and a drawer. Number 6216 stamped on lower left of back. Circa late 1800s?

Appraiser's Description:
One 20th Century Queen Anne style Chest on Stand
Appraiser's Remarks:
This piece actually dates from the second Quarter of the 20th century (1925-50), the style having gone through a number of revivals in popularity since it's original appearance in Colonial North America. Values for these pieces vary by how close they actually resemble the originals, quality of construction and maker. The maker of this one is unknown, but resembles those sold in New York during the 1920's through early 1930's.
Estimated Value:
$500.00- $700.00