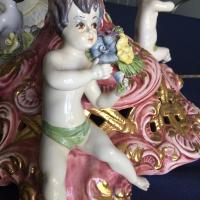 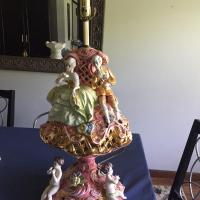 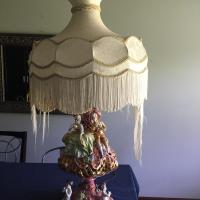 Very large lamp. 50" tall with shade, intricate male/female figures and cherubs around base holding flowers and birds. Tag that says Azzolin Brothers made in Italy and gold markings on the underside that say Made in Italy and F/508

Appraiser's Description:
One Italian Capodimonte style Lamp
Appraiser's Remarks:
Today these Porcelain pieces with their high relief style are commonly identified in our current market place as "Capo-di-Monte", even when not made by the original company. Based on your images and the markings, this is a quite modern piece, most likely dating from the third quarter of the 20th Century. Full country of origin markings such as "Made in Italy" were not in general use until the mid 1920's, most like this example tend to post date the 1960's. In the current market values for these Capodimonte style pieces are quite modest, similar pieces are still in production to this day. While you will see some of these lamps with enormous prices on them, it's seldom they sell for anywhere near those amounts, at auction comparable lamps often sell for under $100.00 currently.
Estimated Value:
$150.00- $250.00