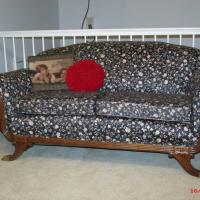 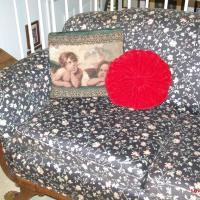 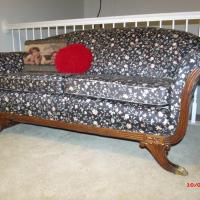 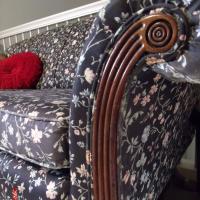 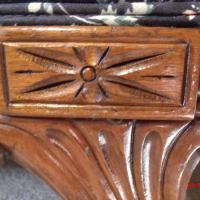 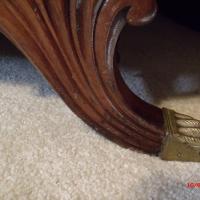 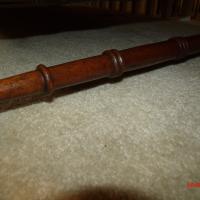 Wish to sell several antique/vintage items & the largest is this Duncan Phyfe Loveseat. I assume it's from the 1940's but have never had it appraised & am uncomfortable setting a price, just in case it's worth more than I know. Apparently two-cushion DF loveseats aren't that easy to find, so I've had difficulty making a comparison. My guess at the value would be around $300-$400, but would like someone to stop me from selling too quickly if it's potentially older than I think.

It was purchased in Kentucky about 40 years ago & has been in use since. The uphostery when I obtained it was a beige brocade, but was reuphostered in the black floral print shown in the photos. The photos also show the wood slightly lighter than it is in person. At a glance, it looks very dark brown but close-up you see the gold undertones & dark vein streaks. The grain looks more like Mahogany but I don't know that much about wood. It doesn't appear to have been restained & I've just used regular polish.

The photos also show close-ups of the wood design along the bottom of the seat which has four rows of carved connected tube-like rows that curve up the front of the arms, ending under each arm with a circular design. The legs have a similar design, but wider and curved, somewhat like an opened Lily. Above each leg is a horizontal starburst design. The curved legs end with a metal claw foot. Along each end of the sofa is a spindle shaped wood rod with reeded type design, also shown in one of the photos. On this piece is three connected carved rings in the center, then a space & two connected carved rings & finally next to the legs one carved ring on each end.

Hope this helps & thanks in advance for your help!