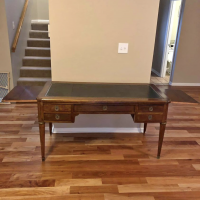 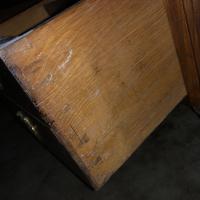 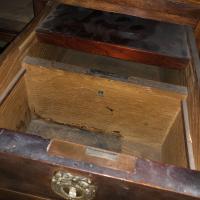 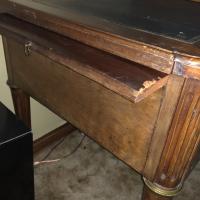 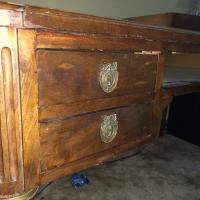 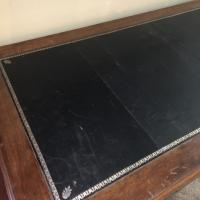 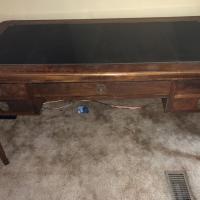 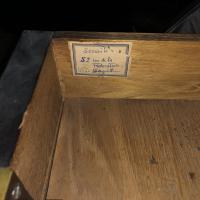 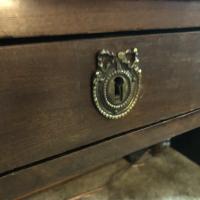 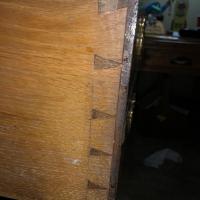 I recently purchases a supposedly antique writing desk from someone on Facebook (I didn't spend much). The desk isn't in very good condition, but I was wondering if I could get an idea regarding the era of the piece, origins, and any possible value. The dovetails on the drawers have some cutting marks indicating that the piece is handmade, but they are very uniform as well so I cannot determine this aspect on my own. The desk also appears to have previously been refinished (and not very well) and the leather top was possibly replaced at some point. The only markings on the desk are on a single handwritten label inside the upper left drawer (see image) which looks to be written in French (I also found an old French wedding invitation in the back of the desk from 1972). The hardware on the front of the desk is not solid brass (not magnetic), but the keyhole trim is real brass. I found one nail which appears to have been handmade in one of the mortise locks in the drawers, but other screws vary in age due to replacement. There are also no markings on the mortise locks, but they are solid brass.

Any help or insight would be appreciated. Thanks!

Appraiser's Description:
One Late 19th Century Louis XVI Style Desk
Appraiser's Remarks:
It's a Continetal piece, and most likely French. Based on the construction details it dates from the late 19th century but is styled after Louis XVI style examples made during the late 1700's. The style has been revived many times since its original creation, last popular during the 1960's. Small desks like this are always popular decorator pieces, values depend a great deal on their condition and vintage. Examples like this in need of restoration often go at auction in the $300.00- $500.00 range.
Estimated Value:
$300.00- $500.00