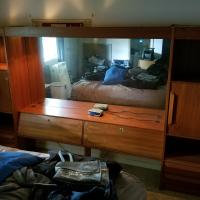 Pardon the mess, please, we're in the middle of moving.

I'm fairly certain this piece is at least 35 years old. I can recall my parents putting it together.

It's in good condition except the light fixtures have flayed over the years.

Thank you very much for your time.

Appraiser's Description:
One King Size Head Board Unit
Appraiser's Remarks:
Its design is pretty consistent with wall units made during the mid to late 1980's, loosely based on Mid century Danish Modern furniture. Most of it is constructed of particle board/plywood with teak or walnut veneers, this one appears to use walnut veneer. Values for pieces like this depends a great deal on its maker/ Designer, with pieces by well known Scandinavian companies selling for ten times what a mass produced unmarked example like this one would sell for. Check for labels, there are some American pieces that do have higher values depending on the Maker/Designer.
Estimated Value:
$300.00- $400.00