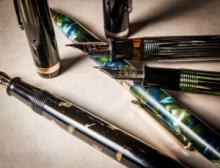 Fountain pens have been popular since the early 1900's. Charles Lindbergh used a Waterman pen when he made his solo flight across the Atlantic. From Waterman, Sheaffer, Parker, Conklin and other often sought after manufacturers fountain pens have touched the hearts of many.

During the 1950's fountain pens were often being replaced by the more popular ball-point pens for ease of use and convenience. However, many still preferred the elegance and beauty of a fountain pen and remained devoted to their use.

If you are serious about collecting fountain pens there are many things that you'll need to know. First you must decide if you want to collect perfect specimens or if you are interested in "getting your hands dirty" and getting into the repair aspect of older fountain pens. If you are interested in doing some repairs, often not very complicated, you'll find even better bargains available which when completed will be as good if not better than a pen in original mint condition.

Know how to inspect a potential pen purchase using these methods. Often a good place to start is with a good pen resource book, such as Collectible Fountain Pens by Glen Bowen. Using a resource like this will allow you to compare actual pictures and descriptions with the pens that you are inspecting. Don't be afraid to take the book with you when going on a pen finding expedition. If a potential seller is against using a book for comparison persons for your purchase - go somewhere else!

Here are some general rules to follow when looking for a good fountain pen:

1) Check the match of the cap and barrel - Often pens are mixed marriages in that the pieces may be a combination of pieces from mixed pens. This is often in the form of a cap from one model (usually the same manufacturer) and the barrel of another model. Be sure that the cap and barrel fit properly and that the color is contiguous and not discolored. The cap and barrel should fit smoothly together, there should be no binding or difficulty when screwing the cap on or off. If there's a little dirt that's o.k,, you're looking for defects in the quality of alignment and the threads.

2) Look at the nib. The nib is the part of the pen that you write with. Nibs are often made of gold, silver, and other metals. An original nib that matches the pen is imperative. You don't want a nib from a different pen under most circumstances (only if the body of the pen is so rare and valuable that it is still worth purchasing). Most pen manufacturers stamped their company name on the nib of the pen. Compare the pen body's name (i.e. Waterman) with the name imprinted on the nib of the pen, but remember that even if the names match it still doesn't mean that you have the correct nib with that exact model of pen. The nib could be from the same manufacturer, but from a different pen. Again, use your resources (books, Internet, speaking with other collectors) in order to verify that you in fact have a complete original pen. Don't worry, after a while it will become second nature to you. On the tip of the nib is a small point which is made of iridium. This point is crucial in being able to write with the pen successfully. If the iridium is missing or damaged then the nib will not function properly and will have to be replaced or repaired. There are very few pen specialists in the world who will repair iridium or nibs for that matter.

3) Look at the external features of the pen such as the clip, the filler lever, the barrel bands (if any), and any of the other ornamental features on the pen. Make sure that they don't show signs of excessive wear.

4) Look for cracks. One of the most saddening things when buying a pen is to come across a perfect specimen only to realize when you get home that you have cracks in the pen. Often the cracks are hairline and will be in the cap of the pen and sometimes the barrel. Often you can't see the cracks unless you use a small flashlight to carefully scrutinize the entire pen. If you have a loupe or magnifying glass you can often use these to search for cracks better.

5) Does the pen operate properly? If the seller will let you, see if you can the pen's functionality. Most sellers won't allow you to use ink, however you can often test it with water to see how the internals (bladder, etc.) of the pen are functioning. You'll also be able to feel how the nib writes - if it is too fine or too broad or writes scratchy. If this is a pen that you are considering writing with then be sure that you're comfortable writing with it in both the way it feels to hold it and the way that it writes. Be very careful that if you try to lift the filler lever in order to add ink or water for your testing that you don't force it. If a pen needs some repair it will often be within the internals of the pen and a stuck filler mechanism which is forced to open will often bend or break the mechanism. Gently try to lift the lever mechanism - if it doesn't lift easily don't attempt to fill the pen!

Next week, we'll cover how to determine a pen's value, and where to find the pens that you are looking for. If you want to get started on your pen hunt we recommend some of the larger antique shows and swap meets as a good resource.

If you're just getting started and want some good resources for learning about pens, we recommend The Illustrated Guide to Antique Writing Instruments by Stuart Schneider, George Fischler. Another good resource is The Fountain Pen : A Collector's Companion by Alexander Crum Ewing.