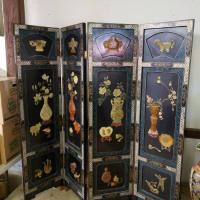 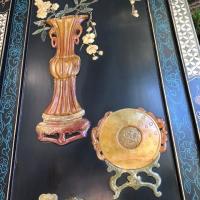 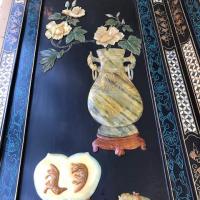 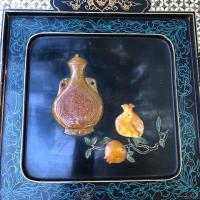 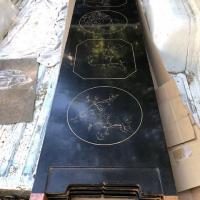 6' tall and has soapstone? jade? abalone? not sure what the decorations are made of

Appraiser's Description:
One Chinese Black Lacquer and Hardstone Screen
Appraiser's Remarks:
This what's called a "Hardstone Screen". Hardstone is a term used loosely to refer to any hard gem material used for carving. Hardstone is usually presented as cameos and intaglios but is also found as intricately fitted mosaic pieces. Commonly, hardstone refers to varieties of chalcedony such as onyx, sardonyx, agate, carnelian and jasper. Some hardstone screens like this can date to the 1920's, but most with hardstone inlay tends to post date World War Two ( 1945). Much of them sent back by troops and sailors stationed in Korea or Vietnam. Similar screens are still in production in Korea, China and South East Asia. At auction, where most of these screens currently change hands, comparable pieces often go for $1000.00- $1800.00
Estimated Value:
$1000.00- $1800.00