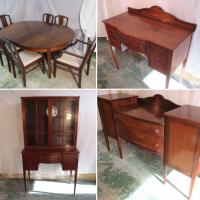 I purchased this dining set in Arecibo, Puerto Rico. Set was purchased from NYC Wanamaker’s Dept store in 1915 for $1,000 ($26k in today’s money). Its the Life Time Furniture line from Grand Rapids Bookcase & Chair Co. (see sticker). Within that company, I have learned, known designers like Stickley had their own furniture lines. It’s probably not groundbreaking but the design does have merit and what is really unique is that I have the ENTIRE SET! have been told its a repro of hepplewhite? or Federal? So the set is a dining table, 6 chairs, a buffet, a server and a china cabinet. All pieces are set on tiny casters except the chairs. Set was in same family (3 generations) until i purchased it a month ago. thanks again! Mark

Appraiser's Description:
Hepplewhite Style Dining Room Set Lifetime Furniture. Grand Rapids Bookcase and Chair Company
Appraiser's Remarks:
Your set is in the Federal Revival style, primarily designed after English designs by George Hepplewhite and it typical of furniture made from World War One through the 1930's. The company the made it produced mid range furniture, and I doubt is sold for anywhere near 1000.00 in 1915, as whole suites of tables and chairs could be purchased for under $100.00 at that time. Grand Rapids Bookcase and Chair Co. was formed in 1911 by the merger of Barber Brothers Chair Co and Grand Rapids Bookcase Co., both owned by the Barber brothers, A.A. and J.C. The Lifetime name had first been used around 1905 for a line of Mission style chairs, now it was to become the name for the company is best known for. Under the Lifetime trade name several lines of furniture were made. Ads from the 1910s and ‘20s show dining room furniture, living room, and hall furniture, and spinet desks in a wide range of period styles, including Spanish Renaissance, Spanish Gothic, Elizabethan, Jacobean, Georgian, Adam, and Early American. Favored woods were walnut and mahogany. The company operated until it was merged into the John Widdicomb Company in 1956. Soon after it was purchased by Medallion Ltd. and operated as Hastings Corporation until it finally closed in 1975. Currently furniture of this period and style is not in as great demand as it was in the late 1980's, with comparable sets now selling in the $450.00 -$800.00 range at auction.
Estimated Value:
$1800.00