From my research, I know that these vases are definitely Japanese and the relief decoration is that of the HO-O Bird (the Japanese Phoenix) which encircles the vase entirely.  The birds face is emersed in the end of it's tail feathers.  I have also found out that in both Chinese and Japanese mythology, the Phoenix is representative of the Empress of the Imperial Court but I have been unable to identify if the colour of the vases is representative of rank like it is in the Chinese system.  The glazes are in immaculate condition and there are absolutely no chips, flea-bites or other deformaties anywhere.  There is quite obvious crackling of the glaze which it typical for the age.  I have estimated their vintage from late 17th to early 19th century but that is a guess only based on what I have found out so far and reading through numerous web-sites.   Each vase is quite heavy, hence the reason I am presuming that they are stoneware and both are moulded.  The moulds must have been very sharp and clean as the design of the HO-O Bird is crisp and clear.  The HO-O bird is depicted with its feet down and there are clouds on both the top and bottom of the vase also which would indicate that it is descending from the heavens, which from what I have read in Japanese mythology, is a sign of good tidings and happy occassions.  I did find out that the Seto prefecture was the only kiln to continue producing glazed wares so I am presuming that these may be from that Kiln.  I have also read that the Nara Prefecture also produced Imperial wares when the Imperial Court was located in Nara, however that was quite some time ago (around 600 to 700BC) so I don't think they are that old.  I hope you can give me a market price and confirm their ages etc.  Thanks 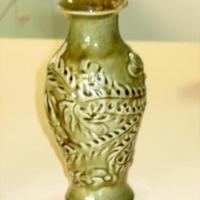 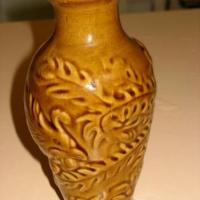 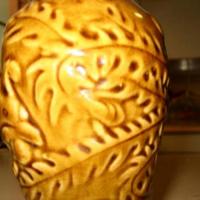 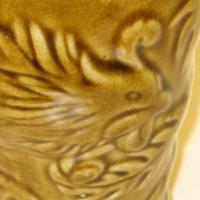 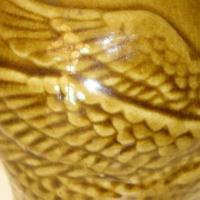 The table is mahogany and tooled leather. It has been in our family since at least the mid 50's. I has been well cared for and is in good condition. 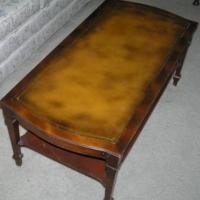 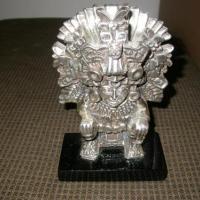